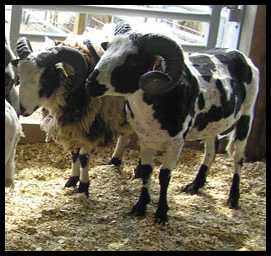 As I've been plowing my way through Genesis this week I reread the story of Jacob working for his Uncle Laban. You can read it for yourself in Genesis 30:25-43. I love this story because it shows just how clueless we can be to what God is doing, taking credit ourselves for something that we couldn't possibly do.

In this story, Jacob strikes a deal with his Uncle in order to get some wealth for himself. God had been blessing Laban considerably as Jacob had been taking care of his flocks, and now Jacob wants to provide for his own household. The deal they come up with is that all the striped and spotted sheep that are born in the future will go to Jacob and the rest go to Laban. Laban agrees and immediately separates all the sheep that are already spotted. I guess he knew a thing or two about dominant and recessive genes. Despite that, Jacob comes up with this master plan. He wanted striped sheep, so the obvious thing to do is put something striped in front of them while they mate. Hence, he made striped sticks and put them in front of his white sheep to make them turn out striped.

What?! Did I miss something here? Does this really work? You animal breeders out there, have you tried this? Could you do this with other things? Like, if I wanted my salad to taste like a hamburger could I just prepare it in front of a hamburger?

Now, I don't know a lot about the science side of this, but it sounds a little fishy to me. However, despite my modern mind trying to pick this apart, the strategy works for Jacob. He ends up with all the strong sheep being spotted and striped and sends all the lame, sickly white sheep over to his Uncle.

If you stopped there, scratching your head a bit, you aren't alone. I'm sure Uncle Laban was wondering what was going on too. I can imagine Jacob being pretty proud of himself for coming up with such a clever scheme. Not only did his flocks increase, but all of his other possessions increased as well, all from a few striped sticks?

Of course, we're leaving God out of the picture if we stop there. I wonder what God was thinking as Jacob started peeling the bark off those sticks to make them striped. Did He just shake His head? Did He laugh? We don't really know. What we do know is that, in Jacob's ignorance, God prospered Him. God had promised to bless him and make him a great nation, as he had his grandfather Abraham and father Isaac. That was the reason Jacob had all striped and spotted sheep. It wasn't his scheming, but God's blessing.

I wonder how many times I've had success in my life and chalked it up to my cleverness. Did a nicely worded resume get me a job? Was it my perfectly parted hair that attracted my future wife to me (I know that isn't true)? Was it my carefully planned route that got me home from my trip early, beating my GPS estimate by 10 minutes? Those things may have played some role, but maybe they didn't. Ultimately, God is the one who brings success because He wants to. I need to remember to give Him more, if not all, of the credit when things go right in my life.