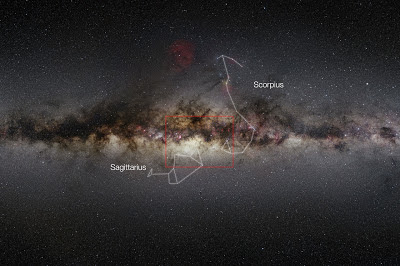 (click on the image to enlarge... you won't be disappointed)

Psalm 19 tells us that the heavens declare the glory of God and the skies proclaim His handiwork. Are you ever impressed with God's creative ability as you look at the stars? One of the benefits to living in the country is that the stars are beautiful on a clear evening. You can see so many of them! When I gaze up to the heavens on those crisp evenings I am reminded of just how big this universe is and how small I am. I think, along with the David in Psalm 8, "When I look at your heavens, the work of your fingers, the moon and stars, which you have set in place, what is man that you are mindful of him...?" How can you not be humbled at the majesty of it all?

A recent photograph was just put together that has 9 billion pixels (9 gigapixels). A sample of that picture is shown above. So far, scientists have identified 173 million different celestial bodies, 84 million of which are stars in this image. That is just in the Milky Way galaxy, not to mention the other millions of galaxies out there! Every little dot and dust-like mark in this photo is something unique, created by God, and probably larger than the planet we live on. (You can read more about the huge photo and that story here). I am amazed at God's handiwork, yet the response from the scientific community has been a little different. In the article, one of the astronomers says he is hoping to learn more about how galaxies evolve, and maybe how our own galaxy came into existence. There is no mention of God or being humbled by the awesomeness of creation.

Of course, I am not surprised by this. For thousands of years people have looked at the stars and then focused on the wrong thing. It used to be the gods of stars and planets. Now it is the god of science and technology we focus on. Whatever it is, people are still blind to the fact that God has created this world. The Apostle Paul tells us this is what the world is like when he writes in Romans 1:18-23:

"For the wrath of God is revealed from heaven against all ungodliness and unrighteousness of men, who by their unrighteousness suppress the truth. 19 For what can be known about God is plain to them, because God has shown it to them. 20 For his invisible attributes, namely, his eternal power and divine nature, have been clearly perceived, ever since the creation of the world, in the things that have been made. So they are without excuse. 21 For although they knew God, they did not honor him as God or give thanks to him, but they became futile in their thinking, and their foolish hearts were darkened. 22  Claiming to be wise, they became fools, 23 and exchanged the glory of the immortal God for images resembling mortal man and birds and animals and reptiles."

This blindness and foolishness has been around ever since mankind fell into sin and it will continue until Christ returns. However, if you eyes have been opened by the Holy Spirit, if you are one of God's children, take a look again at the stars and be amazed. Wonder at what God has done, and wonder even more that amidst the billions of stars and billions of people, God loved you enough to send His Son to die for you. Yes, we serve an amazing God!
Creation Theology Thoughts