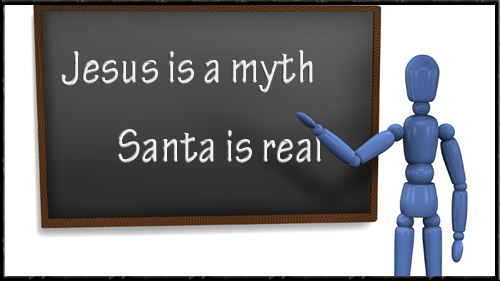 After my daughter's last day of preschool, she informed me that she was a little afraid heading into Christmas. When I asked her why, she responded by saying she was scared she would be on the naughty list and that Santa was watching her all the time to see if she was good. I was a little surprised to hear this. She went on to tell me that her teacher told her that Santa was real and would be keeping an eye on her.

I'm not writing this to judge how you do the whole Santa thing in your home, but we have already told all our kids that Santa is just pretend, like Dora or the Backyardigans. Yes, he was a person a long time ago, but not like in the movies. They've taken this information in stride and we haven't had any real problems with it. But now I had a dilemma. I had the uncomfortable task of telling my child that her teacher was wrong, a thing I don't like to do.

This brings up the larger issue of the true meaning of Christmas and how it is taught. It bothers me that my kids are learning about Santa in school, but not Jesus. It bothers me that we can celebrate this holiday called "Christ"mas, yet most, if not all, of the public schools cannot or do not teach the historical origins of this holiday. It bothers me that it is okay for these same schools to tell my kids that Santa is a real person, watching them all the time, while declaring that Jesus is a myth, or neglecting to say anything about him at all. Maybe I should complain to the schools about it.

I am constantly amazed at the complaining nature of many athiests who can't stand for any religion or mention of Christianity in schools. If a kid wears a Jesus t-shirt they complain that it is influencing their kids towards religion. The schools are hindering them as parents from teaching their kids what they believe is true. Most of the time, the schools cave and take the religion out of the schools. You don't hear Hark the Herald Angels Sing or Away in a Manger in Christmas programs at school any more, do you? All I heard this year was Jingle Bell Rock and Santa Claus is Coming to Town.

What if I complained to the schools? What if I said they were undermining my ability to teach truth to my child by their teaching Santa's existence when I teach that he is not real? I think they would laugh in my face. I think I would probably laugh in my face too. After all, what's really the harm in talking about Santa? We let myths like Santa go all the time. They are just harmless childish beliefs that will pass away on their own, right? Our kids believe in the tooth fairy and we haven't tried too hard to squelch that one.