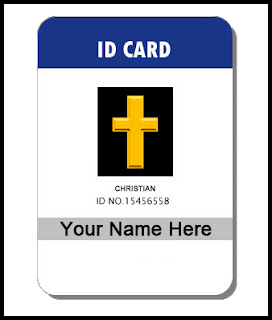 These are a few reflections from our most recent Men's Breakfast meeting at my church here in IL.

Each of us has many roles. Sometimes we have no choice about those roles, like being a son, brother, student, American, etc. Sometimes those roles are things we strive to achieve, like that of husband, mother, boss, or athlete. Other roles we may be less tied to, like Cubs fan, fisherman, scrap-booker, etc. Whatever roles we have, they all play a role in our identity. They help to define who we are. We may even combine these roles from situation to situation. On Sunday I may emphasize my role of Worship Leading Husband Youth Worker. My wife may strive to be an Athletic Homemaking Mother. Whatever our roles may be, they play a part in who we are and in who we hope to become.

So, where does Christian fall into your list of roles? Personally, I find it easy to just be a sports fan, father, son, or even a pastor. That isn't to say that it's easy doing all that these roles demand, just that it is easy to be only those things without the title "Christian" attached to it. Being a Christian is so much more than having a title. It means consistently loving my neighbor, putting others first, being loving, loving God first, and a host of other things as well. Selfishly I often find it easier to just be a father, and not a Christian father; an athlete and not a Christian athlete. It's tough being a Christian. It takes work.

But even this line of thinking is flawed. It makes being a Christian something I choose to do. That may be the case for being an employee or a father, but not Christianity. I can choose, for an evening, to just enjoy being a husband and put off the fatherly role while I'm on a date with my wife. Not so with Christianity. God is the one who has identified me as this and it isn't something to put on and off like a winter coat. If it becomes uncomfortable I can't shrug it off and pick it up later when it's more convenient.

David, in 1 Samuel 16, faced a similar situation. In this chapter he is anointed King and the Spirit of the Lord rushes upon him. From this moment on he is the king, even if the country hadn't recognized it yet. Even though it doesn't become official for ten years, he lives as a king, protecting his country and fighting for God's glory.

As a Christian, I have that same Spirit within me. God has given me the role as His child, as a Christian. Rather than trying to work around it, I need to adopt this role into all my other roles, just as God has adopted me into his family. My speech and actions should reflect this identity. I am a Christian Husband, Christian Father, Christian Pastor, Christian Cubs Fan, Christian Cook, etc. No matter how trivial the role may seem to me, Christian is attached to it because I am God's child.

I'm thankful that God's spirit not only identifies me in this way, but also enables me to perform all that God has called me to do. I'm not left to flounder on my own. Praise God for this adoption, identification, and enabling strength to be what God has made me to be!
Thoughts