To Forgive or To Judge: Ray Lewis & Lance Armstrong 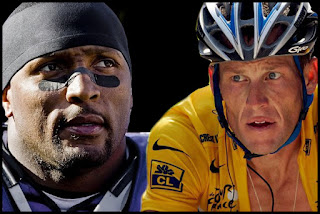 It is so easy to pass judgment on someone else, especially when they deserve it. Each of us loves to serve out justice on our fellow man. Lance Armstrong is one of those who many feel should be judged. After all, he cheated to win bike races and lied about it all these years, only to finally come clean. Is he really sorry, or just trying to gain sympathy? Ray Lewis is another name in the news recently. He is retiring from the NFL after this season and now has a chance to win a Super Bowl championship. However, many find it hard to root for him because of a murder trial he was involved with over a decade ago. He was never found guilty, but it was still pretty suspicious stuff. Is all his good work on and off the field just a cover-up for guilty feelings?

What I find very interesting about both of the situations is that most people don't know either of the men involved, yet we are so quick to speak about them, even slander them publicly, without ever speaking directly to them. Is that gossip? Do we dismiss this speech because they are famous? We, who call ourselves Christians, are so quick to judge based on what we hear in the media. You may say, "But Lance admitted to cheating!" Yes, he did. So what? Who are we to judge? Aren't we called to forgive, especially when someone does come and admit their mistakes?

Christ dealt with this attitude all the time. The religious leaders of his day were very quick to judge. John chapter 8 records the story of a woman caught in adultery. The leaders brought her to Jesus for him to pass judgment on her. He would have been following the Law to do so. Yet Christ says, "Let him who is without sin among you be the first to throw a stone at her." Christ offered forgiveness when others shouted judgment. Christ spoke Grace when the leaders wanted Law.

Have we forgotten how much we have been forgiven? Are our sins less than the sins of others? Did it take more for Christ to die for these men's crimes than for ours? What amazes me is that our culture, a culture riddled with sin and problems, seems quicker to offer forgiveness and celebrate restoration than Christians are; Christians who have experienced the cancellation of their sin because of the death of Christ. We should be the first to forgive, not just the first few times, but "70 times 7" times as Christ told Peter. That is why we are told to pray "Forgive us our sins, as we forgive those who sin against us" in the Lord's prayer.

Let these men remind us of the need we all have for forgiveness. We are not perfect. We are not the final judge. We are not the ones who decide what punishment fits what crime. In the end, we must leave those roles with Christ and hope that He will be gracious to these men, just as He has been gracious to all who have faith in Him.
Culture Grace Sports Thoughts