God is Sovereign, Even Over a Tornado 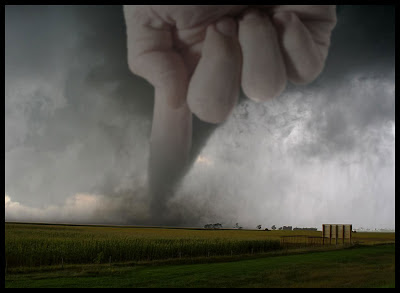 "From its chamber comes the whirlwind, and cold from the scattering winds.
By the breath of God ice is given, and the broad waters are frozen fast.
He loads the thick clouds with moisture; and clouds scatter his lightning.
They turn around and around by his guidance,
to accomplish all that he commands them on the face of the habitable world.
Whether for correction or for his land or for love, he causes it to happen."
"Hear this, O Job; stop and consider the wondrous works of God."
~Job 37:9-14

These amazing words were spoken to Job by one of his friends. What's amazing about them is not just the truth that they convey about our sovereign God, but that they were delivered to a man whose children had been recently killed in a tornado. In Job 1:18-19 we read "Your sons and daughters were eating and drinking wine in their oldest brother's house, and behold, a great wind came across the wilderness and struck the four corners of the house, and it fell upon the young people, and they are dead..."

With the recent tragic news coming out of Oklahoma about 21 killed in a deadly tornado, including 9 children, we may struggle to read these words quoted above. And yet, knowing that God is in control of all things, that He is sovereign, is the ultimate form of comfort. It is comforting because we know God doesn't just react to tragedy. It doesn't catch Him by surprise. This means that when we pray to God for comfort or deliverance, He can actually do what we ask, if it is a part of His sovereign plan.

We don't know why these things occur. We cannot fathom how something we define as tragic could fit into the plans of a loving God. And yet, somehow, we know that this is true. How do we know this? We know it because God tells us so.

And yet, these words are still hard to read. Someone who has just lost a friend or family member in a tornado wants to be comforted, not told that God is in charge of tornadoes. But these are exactly the words Job's friend, Elihu, gives him. I believe Elihu wanted Job to see the bigger picture, that just because things seem tragic, it doesn't mean all hope is lost. God is still God, we are still His creatures, and He will continue to be faithful to His promise to love us and care for us. Knowing that God oversees all his creation should help us to see the bigger picture; that even if we don't know how, we know that God uses all things for His greater plans.

Job saw this, eventually. Even through the death of his children, he humbled himself before God. He quieted his complaints and trusted that he would one day see God, even if his body was destroyed. His eyes were lifted off himself and his temporary struggles and focused on the eternality of God. And God, in his grace and love, restored Job's life and family. In the end of the story, God rebukes all of Job's friends for their harsh words to Job, except for Elihu. God also doubled all of Job's which had been destroyed; double the livestock, plus seven more children to replace the seven that had been killed. You may ask, "Shouldn't God have given Job fourteen children to double what had been lost?" Well, if the original seven had really been lost, then fourteen would be correct. However, seven more kids did double Job's children. Now he had seven on earth and seven more in heaven, waiting for him when his life was over.

God sees and governs the eternal picture. Whether for correction or for His land or for love, He causes it to happen. Even in this, God is sovereign, God is loving, and God is good.
Creation Sovereignty Theology Thoughts Trust