Secular to Sacred: Easter and Christmas 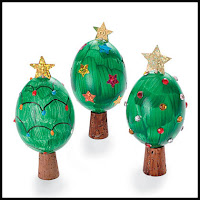 Another sacred holiday is quickly approaching. Easter is just a few weeks away, and with it brings the tension between celebrating the true meaning of the holiday and getting caught up in its commercialization. Much like Christmas, Easter has become less about the resurrection of Christ and more about Easter egg hunts, Cadbury Cream Eggs, jelly beans, and spending time with family and friends. It wasn't always this way. The Christian celebration used to be the main thing on Easter Sunday. So, how has this changed? We could lump Christmas in with this too. How have the two biggest celebrations on the church calendar become secular holidays? To answer that we can look to our history; to the very start of these holiday celebrations.

The beginnings of Christmas give us the clearest answer. In the early church, it was celebrated on January 6, the same date that Epiphany is still celebrated. However, as the first and second centuries progressed, there was competition between this Christian holiday and the more secular holidays celebrating the winter solstice and the some of the sun god celebrations in late December. In the early 300s, there was a push to move the celebration of Christ's birth to December 25. You see, many believed that the sun god was conceived on March 25, around the first day of spring. That would place his birth on December 25, nine months later. Since many Christians associated the birth of Christ with the birth of the sun (Christ is called the Sun of Righteousness after all), they began to see this date as better fitting a celebration of Christ than of the secular sun. Soon, two festivals were going on at the same time rather than just the secular one.

Constantine, the emperor who made Christianity the official religion of Rome, took advantage of this. His desire was that the Christian holidays supplant the secular ones. His strategy wasn't to merge the holidays together, as some have taught. He wanted to make the Christian one bigger and better than every other party out there and generally succeeded with this goal. Pretty soon, pagans started to go to the Christmas party instead of the sun god party simply because the Christians made the birth of Christ into something amazing. Over time, the passion of the Christians for the birth of their Lord and the way they celebrated Christ completely overshadowed every other event on December 25. These other holidays soon went away, leaving Christ's birth the main thing that was celebrated.

As we jump forward to today's celebrations, it seems like the opposite is happening. Christmas and Easter used to be focused mainly on Christ's birth and resurrection. Sure, there was gift giving at Christmas to remind us of the gift of Christ and eggs and bunnies around Easter to remind us of the new "birth" of our Lord in His resurrection. But now, it's as if the secular party on these days is becoming bigger than what should be celebrated. Nominal Christians are looking at the options available on these holidays and saying, "Wow, the world sure knows how to have a great time on these days. Maybe I'll join their party instead of going to church or thinking about Jesus."

The church needs to get back to being excited about these days. Of course, there are churches out there who do an excellent job of upholding the majesty and amazement that should be a part of Christmas and Easter. But, many churches out there almost apologize for having a service! They don't want to inconvenience the culture by meeting too long or holding up family gatherings. Or, worse yet, they shorten or even cancel services, assuming that people probably won't come because they are at a better gathering elsewhere.

I am thankful that these two days are still regarded as mainly Christian holidays. As God's people, we need to continue to uphold the events these days symbolize and celebrate with passion, joy, and amazement at what God has done in the midst of human history through His Son. This isn't about putting on a bigger show to attract people, but rather, being genuine about our love for Christ and letting our worship shine brightly before a watching world. Let's remember this history lesson and not let the secular world creep into these days the same way Christianity did 1700 years ago.