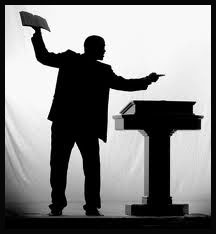 Preaching is a sacred charge and a huge responsibility. James 3 instructs us that not many should become teachers because of the weight of accountability that comes with such a position. Thankfully, the church is filled with wonderful preachers and teachers. I love listening to a good sermon, whether live or from the past, and seeing new insights into God's Word through whatever person is preaching.

However, every once in a while, a sermon comes along that really rubs me the wrong way. The pastor seems more interested in making a point than preaching a text, and often he gets into a judgmental mode where he follows the outline I used for this post: I'm right, they're wrong (everyone who disagrees with me). Let's pray.

Very recently I heard just such a sermon from a very well known evangelical preacher who 98% of you would know. This man has preached and written a ton of good stuff. But, he also can preach with a lack of love for those who may disagree with him. In this sermon I was listening to he was combating a controversial issue. Without stating the issue, I think there are good, godly Christians on both sides of it. Here are a few comments he made during his sermon (with a few edits to disguise the issue and the preacher).

"We here at [this church] understand [this issue] biblically. We understand its method, we understand its meaning... there's a world of people who don't get it, who don't understand it... There are folks who are just plain confused about [this issue]." This language implies that if you disagree with him you are unbliblical and that his church alone (and those who agree with his church) have the truth. He went on to say that one side of this issue (not his side of course) is not even in the Bible. He states several times how confused one must be to believe in this. In his closing prayer he states that this is "devilish conduct."

Is this speaking the truth in love? Is this preaching with humility, seeking the unity of the body of Christ? To me it sounded like a noisy gong and a clanging cymbal, because it wasn't done in love. This man, with a few words, has demeaned millions of Christians and hundreds of respected and godly theologians. According to him, men like Augustine, Calvin, Luther, Edwards, Sproul, and hundreds of others are confused about this issue and indulging in devilish conduct in the church. What arrogance! These men have their faults and weren't 100% correct in everything they did, but to claim that they are confused at best and intentionally misleading the church at worst seems the opposite of speaking in love and seeking the unity of the church.

Of course we will, and do, disagree with one another about one issue or another. But, there is a better way than "I'm right, they're wrong. Let's pray." What about saying, "This is a tough issue that many good men disagree on. Here at our church we interpret the scriptures this way and believe this is correct. However, we don't question the salvation of others who may believe this other way, which also has been accepted as true throughout the history of the church."

There are many issues on which we must take a firm stand. Abortion, murder, addiction, slavery, and the sanctity of biblical marriage are just a few that I think the Bible speaks clearly about. However, there are a ton of other Christian areas (the End Times, music in worship, frequency of communion, baptism, church government, etc.) where things aren't as clear and we should be gracious when we discuss them.

Instead of "I'm right, they're wrong. Let's pray", perhaps we should say "I'm pretty sure I'm right, others may disagree. Let's pray for one another."
Church Doctrine Thoughts