Why I Believe in Infant Baptism Part 3: Baptizing Unbelievers and OT Examples 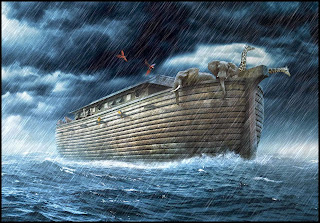 Baptism can be a very confusing topic. Hopefully, my last post wasn't too muddled. I've found that examples tend to help explain things well, and the Bible gives us two examples to help us understand baptism better. They help answer another hard question that is posed those who believe in infant baptism: "Why would you baptize an infant when they haven't professed faith in Christ? Aren't you effectively baptizing a non-Christian? All of the NT examples are belief, then baptism, not the other way around, so how do you support baptizing babies from the Bible?"

That is a tough question. Is there any precedent for baptizing unbelievers? I would answer that there is, and they can be found in the examples I mentioned earlier. Both are Old Testament events which are referred to by New Testament writers. The first is found in 1 Corinthians 10:1-2 where Paul writes, "I want you to know, brothers, that our fathers were all under the cloud, and all passed through the sea, and all were baptized into Moses in the cloud and in the sea..."

The second is fount in 1 Peter 3:20-21 where Peter writes, "...because they formerly did not obey, when God's patience waited in the days of Noah, while the ark was being prepared, in which a few, that is, eight persons, were brought safely through water. Baptism, which corresponds to this, now saves you, not as a removal of dirt from the body but as an appeal to God for a good conscience, through the resurrection of Jesus Christ..."

These examples bring a lot of clarity to our earlier question of baptizing someone who hasn't professed faith in Christ. Here we see two examples from the days of Israel: the crossing through the Red Sea and the Flood. Both instances have a lot in common, but we'll stick to the ones that pertain most closely to baptism.

Water
In each example water is used. It is used as a form of judgment to show God's displeasure at sin and disobedience. In one instance the water destroys the Egyptians who were persecuting His people. In the other, water destroys a rebellious world seeking its own way. Those who are under God's protection come through the water, unharmed, in a spiritual sense being baptized as both passages mentioned.

Believers and Unbelievers
Another interesting thing to notice is who was in the group that was saved. In the Red Sea example, Israel was saved, but not all in that group were obedient Israelites. This is the group who rebelled against God in the wilderness, who worshiped a golden calf, and who wanted to return to Egypt when they got hungry. This group included Nadab and Abihu who offered strange fire to God and were immediately consumed by God's wrath. Granted, not everyone in this group was like that, but there were certainly a lot of them. True spiritual Israel and unbelieving Israel both saved from the same watery judgment, both "baptized" through the water by God, but not all ending up in heaven with the Lord.

There are many other good truths to be found in these examples. If you'd like to read more you can click on the link below to a paper I wrote on this very topic. It includes other references to good source material as well.

Do you see the answer yet? Baptism, as I mentioned in my last post, is something God does to us, just as He baptized Israel through the Red Sea and Noah's family in the flood. However, just because you experience physical baptism doesn't mean you are a part of God's family, just as it didn't guarantee it in these examples. That requires the further steps of faith and belief in the sacrifice of Christ, as Peter mentions in his letter.

This doesn't answer all the questions, but seeing this truth was a big step for me in tying OT truths about baptism and God's people in with how He works with the church in the NT. In the next post I'll try to tie Old and New Testaments together a bit more through the example of Abraham, plus I'll hopefully clarify a few things in regards to OT circumcision and NT baptism.

Other Posts On "Why I Believe in Infant Baptism":
1- Opening Thoughts
2- What is Baptism Anyway?
3- Baptizing Unbelievers and OT Examples
4- Baptism from Abraham to Us
5- Applying It Today