Why I Believe in Infant Baptism: Opening Thoughts 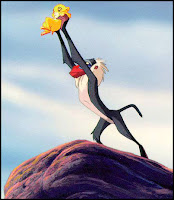 What images come to mind when you think of infant baptism? Is it a sacred ritual done with pomp and circumstance with robes and a gold plated dish of water? Is it a routine ceremony that is a regular part of your worship? Is it a crazy belief some of "those" people believe in, but certainly not someone serious about Bible study? Do you have images of a child being held up before the church like Simba in The Lion King? Is it just a glorified baby dedication?

I think I've had all of the above mentioned thoughts at one time or another throughout my time as a Christian. I've believed the stereotypes and didn't really study it too hard on my own. But, once I did, I came to some revelatory conclusions, at least for me. I wasn't raised to believe in infant baptism. I grew up as a baptist, meaning that I believed what most baptists believe. A person professes faith in Christ first, then shows that commitment by obediently entering into the waters of baptism. From infancy I was taught this and believed it. As I grew in my faith I studied the issue and became more convinced of its truth. I'd heard about others that didn't practice this, but I didn't give them much thought.

Before I get into some of the meat of why I changed my view, I want to say at the outset that I love, respect, and admire many who hold to the "Believer's Baptism" position, including my own father, past pastors and mentors, and many of the authors I enjoy reading who are alive now and who have lived before. Do I think men like John Piper, Mark Dever, or John MacArthur are lost in sin or living in error because they don't believe they way I do? Of course not. Good men and women can disagree on this issue and still love each other and even serve in the same church together.

Personally, I would place this as a secondary matter in terms of its importance towards ones salvation. That isn't to say it isn't important to know what you believe on this issue. What I am saying is that your belief on this matter doesn't determine whether or not you are a Christian. The deity of Christ, the inerrancy of scripture, a belief in the Trinity, even believing that we should be baptized... these are of primary importance. However, the who and how of baptism, the frequency of times you take the Lord's Supper each month, the events surrounding the return of Christ... those are still important, but not in regards to determining your salvation. Again, that's my opinion, and since this is my blog my opinion is the one I'll be writing about.

As an example of this belief's secondary status, I look at my current church. To be a member of this church you can believe either believer's baptism or infant baptism. Membership rests on unity around the primary issues of the faith. However, to be ordained as an officer of the church you must have agreement around this and other secondary matters as well. Here there are members of the same church that disagree on what has been a controversial issue, yet they are serving together with love and charity towards one another.

Finally, to wrap up these opening thoughts, I want to clarify what I mean by using the term "Infant Baptism." When I or one of my PCA brothers uses this term, we don't mean that we believe only infants should be baptized. Instead, we would say that baptism is the sign and seal of the New Covenant which should be applied to the whole covenant family. If someone professes Christ, they should be baptized. If that happens to a 7 year old, a college student, or your grandparent, baptism is the step of obedience that needs to be taken. However, I also believe that baptism shouldn't be limited to believer's only, just as the sign of circumcision in the OT wasn't limited to the Israelites who faithfully followed all of God's commands (more on that later). It is something that should be applied to the whole covenant family. I think the term should just be "baptism", but to avoid confusion I'll just stick to using the term infant baptism, or paedo baptism, for the future since most people know what that is referring to.

Over the next few days and weeks I'll unfold what I believe and how I arrived at that conclusion. A number of you have asked me about this, so this the beginning of my attempt to answer your questions.

If you'd like to read ahead I've linked two resources below. One is an excerpt from Michael Horton's book "A Better Way" which is an excellent treatise on covenant worship. The other is just the introduction to the booklet by Bryan Chapell on infant baptism. If you need a short, pastoral explanation of this belief, that booklet is what I would recommend.

Michael Horton on Infant Baptism
Introduction from Bryan Chapell's "Why Do We Baptize Infants?" booklet

Other Posts On "Why I Believe in Infant Baptism":
1- Opening Thoughts
2- What is Baptism Anyway?
3- Baptizing Unbelievers and OT Examples
4- Baptism from Abraham to Us
5- Applying It Today
Baptism Theology