September 07, 2012
We live in a world full of post-modern ideas. Maybe you've heard of post-modernism, maybe not. It is a major worldview shaping how we look at life, culture, really everything around us. It centers on a few major ideas. One is that there are no absolute standards to define things like beauty, art, truth, etc. Maybe you've seen the "art" shown below. It is a simple bicycle wheel on display. This is art, and who are you to say otherwise? Without a standard to measure it by, anything can be whatever we want it to be, and who are you to say that it is or isn't beautiful or artistic? 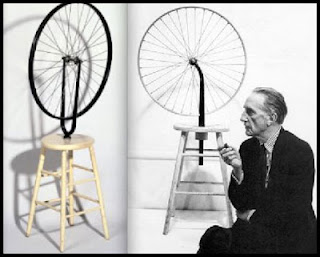 You can see the problem. There is no absolute authority. When we start flushing this principle out in other areas, it becomes much more serious. If you have no absolute authority, what is right and wrong becomes defined by each individual. Something can be true for me and not necessarily true for you. In simple things, we all recognize this to be correct. Soy milk might be great for you, but not necessarily for me. Simple jazz combos might epitomize musical expression for me, but maybe country music is your thing. Who am I to tell you that you are wrong for liking country music or you to tell me that I'm incorrect for preferring jazz. We have grown up with this concept of toleration and preference. We have become saturated with it. It is in our music, movies, television shows, Facebook posts, churches, and everyday conversations.

When this mindset shifts to include things that actually do have a definable standard, conflict occurs. Conflict happens between those of us who appeal to an absolute standard and those that reject that standard for one of their own. If I define marriage as between one man and one woman and appeal to the Bible as my standard for that, those that don't see the Bible as an absolute standard will undoubtedly disagree and call me intolerant. If I say that men and women have distinct roles that compliment each other but are not equal to one another and appeal to science and/or scripture as my authority, those who don't share that authority will disagree. "Who are you to impose your beliefs on me?" They'll say. And I'll politely respond by saying that those aren't exclusively my standards or beliefs, they are the Bibles.

It all boils down to authority. Scripture is mine. It is the foundation from which all other authorities flow and on which absolute truth depends. Without that as our foundation it becomes my opinion vs. yours, my preference vs. your choice. If that is really where our standards of truth come from then the opinion of a brain surgeon regarding an upcoming surgery carries no more weight than the person who watched a discovery channel special on the brain. In that situation, I think we would all choose the brain surgeon to perform the operation. Why are we so hesitant to apply the same logic in other areas that are equally important?

Not every idea is correct. Not every idea should be upheld as legitimate. We must measure things by the appropriate standard. For physical matters, that might be a medical textbook or an owner's manual. For spiritual matters, I rest on God's Word.
Culture Thoughts