Worship Wednesday- Christ the Sure and Steady Anchor 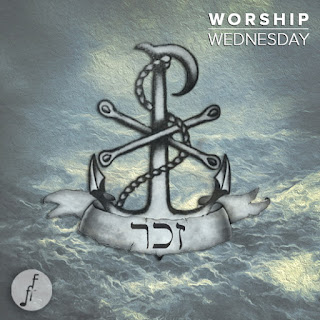 So, full disclosure, this picture will probably be my next tattoo... just sayin'. It's so full of the imagery that has carried me through the ups and downs of life, especially through this past season. In the words of Frank Catton, let me break it down like a fraction for you.

The first image that jumps out is the anchor. But it isn't just any anchor, it's an anchor formed from the classic Chi Rho symbol which has long stood for the name of Christ. Christ the anchor. He certainly has been that for me. As this week's song says, He has been my sure and steady anchor, in the fury of the storm, when doubts blew through me, when my sails were torn, when hopes were few. He has been my anchor.

Wrapped around the base of the anchor is an unwrapped scroll, symbolizing the Word of God which is the lens through which I know Christ and what He's done. Written on that scroll is the Hebrew word "zakar" which means "Remember."

Oh, how many times I forgot, and still forget. The waves of trial blow through me. Or I fall into sin, or depression, or often times both. Like the second and third verses of this song say, temptation seized the battle, floods of unbelief washed over me, and it seemed the night had won.

I think some of the hardest times were in the middle of looking for a new job in early 2018. Believe it or not, the skills of a worship or youth pastor don't translate well to the non-ministry job world. I applied for dozens of jobs, but was either very under qualified due my lack of experience or very over qualified due to my education. I'd get interviews, even promising ones, but the second call would never come or they would fill the position with someone else. I was a mystery to recruiters who couldn't understand why some places wouldn't hire me. But I knew why. I wasn't ready. God needed to do more work in my soul. Secretly I hoped that I would land a job right away enjoy the double income of severance, for which I'm very thankful, as well as another job. What I feared, and eventually came to embrace, was the reality that God would take be down to the brink, where I had no idea how my next week's bills would be paid, then prove His faithfulness over and over again as He provided. That all sounds like a wonderful faith journey, but it's really a nerve-wracking, depression inducing, panic-attack laden trip, walking blindfolded on a tight-rope, trusting that you won't fall because other people say, "Don't worry, it just means something better will come along." (as an aside, don't say that to people going through something like this. Though it may be true, it may not be, and it doesn't help... end aside)

However, this strengthened my faith much more than a quick job would have. Did I ever go hungry? Miss a bill? Have to switch to hot dogs and mac'n'cheese every night (although the kids would've loved that)? Nope. The Lord met every need.

Things are still difficult, but there is a sweetness in the midst of the bitter, knowing that God will prove Himself. Perhaps you are in the middle of your own storm. Maybe it is divorce, or death, or illness, or financial stress, or a wayward child, or being underemployed, or simply the discouragement of the daily ordinary grind. I would encourage you to look to your Anchor, Jesus Christ. Don't forget the final verse of this song. One day we will cross the great horizon, clouds behind, life secure, and the calm will be the better for the storms that we endure.

But heaven isn't the only thing to look forward to. I firmly believe God has promised to comfort and bless His children in this life. Perhaps not with what this world might call riches, but with the richness of His kindness and love. That may seem like a cheap, intangible gift to some of you. But I assure you, it is not. If you truly know the Lord and know His kindness and love, you know it is worth any storm that may come your way. More on that next week.

Christ the Sure and Steady Anchor
by Matt Boswell & Matt Papa

Christ the sure and steady anchor
in the fury of the storm
When the winds of doubt blow through me
and my sails have all been torn
In the suffering, in the sorrow
when my sinking hopes are few
I will hold fast to the anchor
it shall never be removed

Christ the sure and steady anchor
through the floods of unbelief
Hopeless, somehow, o my soul now
lift your eyes to Calvary
This my ballast of assurance
See His love forever proved
I will hold fast to the anchor
it shall never be removed

Christ the sure and steady anchor
as we face the wave of death
When these trials give way to glory
and we draw our final breath
We will cross that great horizon
Clouds behind and life secure;
And the calm will be the better,
For the storms that we endure.

Christ the sure of our salvation,
Ever faithful, ever true!
We will hold fast to the anchor,
It shall never be removed.