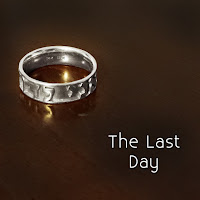 Today is the last day I'll be a married man, at least for now. I'm not sure how to feel about that, or what I should be feeling. Honestly, it's a whole spectrum of things, but one of the greatest emotions is relief. For so many months, going on almost a year now, I feel like I've been living a lie. I've been married, but unable to do really anything a married man is supposed to do. I haven't been able to shepherd my wife, love her, be intimate with her, care for her soul, or truly be one with her. But I also haven't been free to find that anywhere else. I think that's a great blessing in a way as it has forced me to seek the satisfaction and love that often comes from a wife from the One who truly satisfies- the Lord.

I've been with Moriah since October of 1999 and married since June of '04. If you do the math then you know we'll be missing some great anniversaries this year. We certainly had many good years together. The end of it all was so abrupt that I tend to focus on that and forget the good we had together and the three beautiful girls that came from our union.

But today is the last day. And tomorrow is the first of a new chapter. I wonder what God will do?

I've thought a lot about my "relationship status" throughout this season. When the relationship broke back at the end of  '17, I was so desperate to save my marriage that thinking of being with anyone else was the farthest thing from my mind. A few months later, when it was evident that the marriage was over, I honestly felt I would be content just being single the rest of my life. How do you start over after having given so much of yourself to someone else? That intimacy on an emotional, spiritual, relational, physical, and social level is hard to duplicate.

After a few months of that, I thought maybe there might be someone else out there for me, but the chances of finding that perfect someone were so small that it was pointless to hope for it. Is there a strong Christian woman out there who would even want a guy like me? Divorced, three kids, damaged goods in a sense from being hurt and broken emotionally, with my own sins to deal with, etc..... But even so, I started looking, and what I found was that I wasn't ready to start looking.

The divorce-care class I attended shared a very important piece of wisdom that has really stuck with me: "You'll be ready to find someone to marry when you don't need another person to feel complete."

Wow. I felt so convicted. I wanted someone else because I felt incomplete. I missed the companionship, the hand to hold, the person to do something with and bounce ideas off of. Someone to do all of life with! None of that is wrong to miss, but I was looking to another person to feel a sense of completeness rather than finding that completeness in Christ. If I was still looking for that outside of Him, then I wasn't ready.

It's taken me several months to come to terms with that, but I think I finally have. I mean, I don't think I have it down pat, but God has revealed so much of my own heart's weaknesses that I can at least recognize when I'm chasing something, or someone, for the wrong reasons. I know who I am now. I know what my heart wants, good and bad, and I think I know what I need, because scripture spells it out pretty plainly. I pray God continues to keep my eyes clear in the months and years ahead.

So, today is the last day. Today is the final day I feel the bonds of my broken marriage. But tomorrow? I think I'm finally ready to face it. I've been married for 14 years, 7 months, and 23 days. Tomorrow begins day 1 of a new adventure, and I'm excited. The one true God, maker of heaven and earth, and the lover of my soul is by my side. With Him all things are possible.
completeness marriage Promises Trust