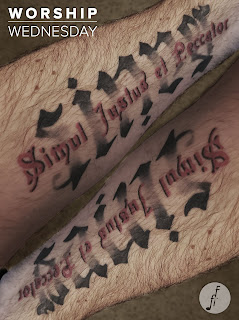 In October of 2017 I was on the threshold of the valley. At the time I didn't know all that God would give and take away, all that He would lead me through. But one thing He was certainly doing was breaking down my pride. You see, humility has always been a struggle for me. Too often I am enthralled with my own gifts and abilities, forgetting the One who gave them to me. Why is that?

Today's song helps with this struggle. It finds the space where the Christian should walk, between utter brokenness over sin and the joy of being made righteous. It's a healthy place where I can honestly say "I am a sinner through and through" while simultaneously praising God that "My righteousness is Jesus life." This is summed up well in the phrase I have tattooed on my arm: Simul Justus et Peccator (Simultaneously Justified and a Sinner). A Saint and a Sinner. That's me. For some reason God really impressed this on my heart, and now I'm reminded of this truth daily whenever I look down at my forearm. This truth, reflected in today's song in throughout scripture, has shaped my perspective on how I see sin, both in myself and others.

For example, when I first learned about my then wife's sin, how she had fallen for someone else, affair, etc., I had several different ways to respond. I could have thrown her out of the house in anger, upset about a future that wouldn't be realized, vows that wouldn't be fulfilled, and a family that would be forever broken. I could've withdrawn and done nothing, becoming a catatonic shell and just existed as time went by. I could've preached at her and tried to convince her with logic to reform. Or, I could choose to love her despite the ugliness of sin and hope for the best, leaving the outcome to God. What to do?

As these options swirled around my head in what seemed like a few seconds, several stories came to mind. One was the prodigal son, exemplifying the forgiving father. Another was Hosea and God's call for him to love someone who would not love him in return. There was also the parable of the unforgiving servant who was forgiven a great debt by his master, but then went and tried to strangle a smaller debt owed to him out of someone else. All of these stories shaped how I responded to Moriah, and how I now respond to my own sin.

Am I any less a sinner than anyone else? Are my transgressions somehow less wicked because I didn't break up a family or betray a spouse? Does my disobedience to the law of God diminish the pain Christ felt on the cross when He paid for my sin? No. I have been forgiven much. I am a sinner through and through. I need God's mercy because I deserve His wrath, just like everyone else. The sins of betrayal, of broken vows, of lies and deceit, are all ones I have committed against God. And yet He still loves me and shows me grace! Yes, I am a sinner, but I'm also a saint (1 Cor. 1:2, 6:11).

My sainthood, my righteousness, is found in Jesus Christ alone. That is why my sin doesn't turn into crippling despair and my saintly status shouldn't lead to selfish pride. My worth, my goodness, is found outside of myself. My gifts that I bring to the Lord are valuable, but their value is found because of my status in Jesus, not because of how special I am. It's like a crayon drawn piece of art my daughter gives to me. The picture isn't valuable because of her artistic ability, but because she is my child. Her drawing has meaning and worth to me because of her status as a part of my family, whereas a similar drawing picked off a random child's desk at school may have little to no value to me.

Once I understand this my pride diminishes and is replaced by joy, knowing my present sin has been passed onto Christ and His righteousness has been given to me. And yet, I still struggle with pride. I think I always will to some extent or another. That's why songs like this and scripture passages like the ones referenced above are so important. I need the reminder that I'm the prodigal, I'm Gomer, I'm the Pharisee. I guess the real question is why hasn't God left me? I'm so thankful for His unlimited grace, and that my salvation isn't based on my works, but on Christ's completed work. God would be just fine without me, but I'm utterly lost without Him.


Not In Me
by Eric Schumacher and David L. Ward

No list of sins I have not done,
No list of virtues I pursue,
No list of those I am not like
Can earn myself a place with You.
O God, be merciful to me–
I am a sinner through and through!
My only hope of righteousness
Is not in me, but only You.

No humble dress, no fervent prayer,
No lifted hands, no tearful song,
No recitation of the truth
Can justify a single wrong.
My righteousness is Jesus' life,
My debt was paid by Jesus' death,
My weary load was borne by Him
And He alone can give me rest.

No separation from the world,
No work I do, no gift I give
Can cleanse my conscience, cleanse my hands;
I cannot cause my soul to live.
But Jesus died and rose again–
The power of death is overthrown!
My God is merciful to me
And merciful in Christ alone.

My righteousness is Jesus' life,
My debt was paid by Jesus' death,
My weary load was borne by Him
And He alone can give me rest.
Grace humility Worship Wednesday