Why I Believe in Infant Baptism Part 4: From Abraham to Us 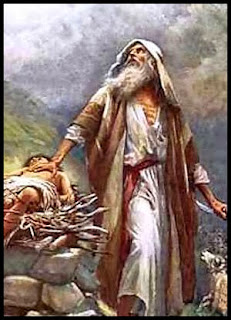 The more I study scripture, the more I see the connections from the Old Testament to the New. The Bible is one Book, telling one story. Certain systems of thought will try to push the idea that only the NT is for the church and the OT is just full of good, moral stories. I couldn't disagree more. Jesus Himself said that the OT was about Him (John 5:39), and if we are about knowing Christ in the church then we better know our Old Testaments. Why do I bring this up during a discussion regarding baptism which many believe is solely in the NT? Because the theme of a covenant sign (which is what baptism really is) begins in the OT. Here's what I mean.

In Genesis 12 God chose Abraham to be the father of His people. By choosing to bless Abraham, God was saying that Abraham, and all those who would be his offspring through faith, would be blessed with salvation (Galatians 3:7-9). Adding to this, the Bible says that Abraham is the father of all who would believe in Christ (Galatians 3:29). To seal this covenant, God gave Abraham the sign of circumcision. It was a sign that Abraham was one of God's children and it was given to him after he had expressed faith in God (Romans 4:9-11). But, it wasn't only given to Abraham. This sign was to be placed on his entire household. At the time, did everyone in his household believe? Had they expressed faith in God? No, they hadn't. But that didn't matter. Abraham circumcised everyone under his care, including his servants and his son, Ishmael (Genesis 17:23-27), who would eventually find himself outside of God's chosen people.

This pattern of circumcision continued throughout the entire OT. Every child born to an Israelite, every foreigner who wanted to join God's people, would go through this ritual, taking on the covenant sign. This was the pattern God established for 2,000 years before Christ came to earth. The head of the household stood as a representative before God for his family. The members of his family would be included in God's covenant. This didn't mean that they would automatically go to heaven or even grow up to be obedient followers of God. In fact, as the OT continues we see many of God's covenant children who were circumcised as infants grow up to be idol worshipers, denying their heritage and following other religions.

Fast forward to the beginning of the church. In Acts 2 we see Peter preaching one of the first evangelistic messages ever. Jesus has already lived, died, and risen again. The Holy Spirit has come upon the apostles and Peter is sharing the message of salvation. Once he is finished preaching, the crowds ask him, "What shall we do?" Peter responds with these words (Acts 2:38-39):

"Repent and be baptized every one of you in the name of Jesus Christ for the forgiveness of your sins, and you will receive the Holy Spirit. For the promise is for you and for your children and for all who are far off, everyone whom the Lord our God calls to himself."

How would the audience of Jews have heard this? Remember, the Jews were used to the head of the household representing their entire family before God. They were used to their entire families being a part of God's people. I think they would have heard that God is continuing his promise of salvation, but now it is through faith in Jesus Christ. The sign is no longer circumcision, but baptism. And this promise, signified by the sign of baptism, is for "you and for your children...", continuing the pattern of the OT of families being a part of God's people.

If God had shifted this plan to individuals rather than families it would have been a huge change from their current practice. God would be saying that for the past 2,000 years I included the whole family in the sign of the covenant, but now under Christ I am limiting it to only those who profess faith. Yet, there is no mention of this change. In fact, Peter seems to emphasize that the promise still includes their children. I don't believe he is referring to future generations of children who believe. He is speaking to a crowd of people who have children, present tense. They would have heard Peter to mean their own physical children, perhaps standing next to them in the crowd. Peter is affirming that the pattern of the OT is continuing, just with a different sign.

This may not seem convincing to you, but once I saw this connection I went from a hesitant explorer of infant baptism to one who believed it was true. If the Bible is one story of an unchanging God, then why would He change so dramatically in his dealings with His people? If children were accepted in the OT, then why not in the New? Circumcision wasn't a determiner of one's salvation, yet this sign was applied to the whole family. Why couldn't baptism be the same way? Either way, the sign doesn't equal salvation. Salvation still comes by faith in Christ alone.

In the next and final post, I'll wrap things up by looking at a few more examples from the Old and New Testaments regarding this new sign of the covenant.

Other Posts On "Why I Believe in Infant Baptism":
1- Opening Thoughts
2- What is Baptism Anyway?
3- Baptizing Unbelievers and OT Examples
4- Baptism from Abraham to Us
5- Applying It Today
Baptism Theology