Resigned: Making Sense of Why I Left My Church 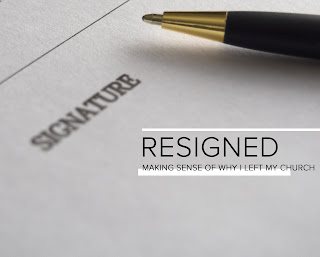 I've had a good amount of time to process my departure from my previous church. In the middle of all that happened I wasn't able to really think deeply about the circumstances and all the consequences that followed. There is much that didn't sit well with me, but I didn't really know why. I had guesses, but now I think I have a big piece of it figured out. Perhaps my journey there will help some of you as you process your own why's for your situation.

Let me start by saying my old church was amazing. I had five great years there. Sure, there were difficulties and struggles, but the victories far outweighed the defeats. The church was so generous in taking care of my family as I left. They asked me to take some time off, which I appreciated, back in December of 2017. For the next five months I received full pay as I transitioned into another career and moved on with my life. God used them to provide for me financially and that was no small thing.

Yet, the nagging question still remains. Was it really necessary? Did I need to go? My wife's sin was revealed to our church in late November of  '17, I was asked to take a leave of absence for December, and in the second week of December was asked for my resignation. I had done nothing to violate the standards of my employment. I wasn't an elder or a pastor and wasn't biblically disqualified from an office. Why did my wife's sin mean I needed to step away from my vocation, from my church family? I was there, leading worship one week, then the next was gone. Was that the way it needed to happen?

The short answer is yes. What happened happened exactly the way God ordained it to happen. But that was what troubled me so much. I wanted to understand why God would do that. I asked other pastors, friends, family. They were just as perplexed as I was with the need for me to resign. Now, to be fair, it was an extremely complicated situation, involving a number of layers that I don't need to get into. Needless to say, if I continued to attend there and bring my wife there as we tried to work on our marriage, it would've been a big distraction.

A distraction. That's a phrase I heard a lot. Josh, it would be good for you to resign. You don't want to drag the church through something like this. Imagine how hard it will be for others to focus on the Lord in worship with you leading in worship or even sitting in the service. Josh, you shouldn't go to the Men's Retreat. Other men are going there to get away from it all, to be refreshed and to find rest in the Lord. If you went you'd distract them from the reason they went on the retreat. Josh, you should step away from serving and take some time away to work on your family. Don't be distracted by all the ministry stuff.

At the time I desperately wanted to reengage with my church family. I asked if I could serve behind the scenes, attend a small group, Sunday school, men's bible study. Anything. I needed to retreat, to find rest, to have a Sabbath. But I was told to just stick to the main Sunday service. Come in, sit down, keep conversation to a minimum, and leave right away. Especially when my wife was with me. And so, like a good Milford Man, I was neither seen nor heard for many weeks. Again, an incredibly complicated situation no doubt, but did it have to be like this?

As I've thought through the many varied and complicated pieces of this story and the actions my church took to work through them, I finally arrived at this conclusion: it was good that I followed the advice of the elders to resign, because a church that would ask me to resign for something like this wasn't the kind of church I needed in order to recover and find healing.

Those were all things I needed, and praise God I've found them! The Lord knew what I needed to recover. He knew I needed a place that would embrace me and pursue me in the midst of depression and anxiety and losing my identity in so many areas. He knew, and He answered so many prayers in bringing me to my new family.

Like I said earlier. The time I had at my last church was good while it lasted. Many of my friends from that season may read this and feel saddened that this is how things were left. I don't blame the congregation at the church for how things happened. For all most of them knew I just vanished one day and never came back. I'm sure many people wanted to reach out, but didn't know what to say or how to say it, or you were simply respecting the request of the leadership to give me my privacy. Many have recently sent me notes and messages since I started blogging again, and I'm so thankful to hear from the congregation I served for so many years.

So why write this now? After 18 months, why bring up the past? I bring this up because I don't think I'm alone, but I imagine many people think they're alone. That's one of the whole points of why I'm writing. So much of what I've gone through is part of the common struggle many Christians have, and yet we struggle alone, afraid or ashamed to talk about it. If you struggle with addiction, a bad marriage, unruly kids, being underemployed, wrestling with your faith in God's goodness, depression, sexual identity, or a host of other things, you aren't alone. The smiling faces you see on Sunday morning all struggle with the same things you do. Even your pastors and elders struggle with sin, believe it or not. It doesn't do the church any favors to take sin and hide it away, as if that's any less distracting than the gossip that surrounds it. I believe it is even more destructive to our view of God's grace when we do hide it away.

I sometimes imagine what would have happened if my situation had been handled more openly. What if the leadership explained some of it and said, "We have a brother who is desperately trying to save his marriage. Yes, it's messy. Sin is messy and destroys God's good gifts. But one thing it cannot destroy is the bond we have with Christ and the ties that bind us together as this body of believers. Josh vowed to stand beside us, submit to us, serve with us, and strive to maintain the unity of this body when he became a member. Now it's our turn to support him and stand by him, as his family." How many others may have come forward to express their brokenness? How many may have come alongside me and my family in this battle? Alas, the final words of my vow were the very ones often brought up to keep me silent. In order to preserve the peace and unity of the church I needed to keep my distance, seek counsel elsewhere, and not be a distraction.

My prayer is that any church would be a place where people can struggle together in their battle against sin. My hope is that more and more churches would realize that the vulnerability the leadership desires to see in their congregations must be modeled. Repenting of sin is what we constantly do as Christians. Battling temptation is why we daily arm ourselves with the Word of God. How brightly would we shine as God's people if a watching world saw us for what we truly were rather than the happy face we often present. Sinners need to see sinners being saved by grace. They need to know there is hope for them. They need to know they don't have to get their act together first. They need to know that Jesus is there to save the broken and the struggling.

Repenting, confessing sinners, coming to worship God for His forgiveness, unashamed of their faults, knowing that God knows them in their sin and still died for them; those are the people we need to be. Those are God's people, the church. I'm proud to still be a part of His family.

I've written a follow-up post with some additional clarifying comments, giving a bit more context to this complicated situation. You can read that here.
Church Sin Sovereignty Updates

"Romans Doxology" by John G. Elliot, released on When God is Praised  (2006), written in 1989, based on Romans 11:33-36 Click Here to listen to "Romans Doxology" by John Elliot This song is based on Romans 11:33-36 which is the doxology (short hymn of praise) Paul expresses after some rather difficult passages earlier in Romans. It isn't word for word, but it pretty accurately declares what Paul was writing about in this passage. Why I recommend this song for worship- Many churches conclude their services with a song of doxology. It can be difficult to keep this part of the service fresh if you constantly sing the traditional "Doxology" song found in most hymnals. You know the one: "Praise God from whom all blessings flow, praise Him all creatures here below..." While I love that song and have even sung it with added verses, it is also good to sing other doxologies from scripture. This one, based on the doxology from Romans 11,
Read more